A ‘Walking Dead’ scenario: This is what cities will look like when anarchy hits

(Bugout.news) If you’re not a fan of the AMC network’s hit series, The Walking Dead, and you’ve ever wondered what total anarchy would look like in a mid-to-large city – perhaps like the one in which you’re living – you’re missing out on a weekly lesson in reality.

Now, we’re not talking about a city overrun by zombies (for the non-fan, Walking Dead refers to men and women who were killed by a mysterious disease and “came back to semi-life” as a zombie). But to some, the zombies depicted in the series are just metaphors for the untold millions of Americans who will be unprepared for any event that results in anarchy and as such would be forced to wander aimlessly, and in packs, preying on whomever gets in their way.

Imagine, if you will, a massive cyber attack that destroys much of our infrastructure. The power grid would collapse; food distribution systems would cease to function, and the result would be a run on grocery stores and convenient marts; water treatment plants would no longer function; we would be locked out of our banking institutions, and/or our finances would simply vanish into thin air. In short, over the course of a few hours, angst would turn into concern, which would morph into panic, then chaos – and finally, anarchy.

The authorities would initially be able to “control” crowds as well as access to key services, but as people grow hungry and thirsty, frustrated at their inability to access their cash, and cold (or hot, depending on the time of year), order and the civil society would quickly collapse.

Crowds would swell, and most likely they would be armed. At first, the army and police would be able to outgun the armed crowds, but eventually those crowds would become far too large to combat. As mobs began to overrun areas of your city, the police and military would most likely begin to pull back to more defensible positions. In fact, they may abandon your city altogether, leaving you and your loved ones at the mercy of the crowds.

At first, it might even seem beneficial to join the crowd (the zombies), but you would eventually find that even the mob – once unified in its quest to beat back the authorities and gain access to whatever resources remained – would turn on itself. Then what?

The mob would become factionalized; men, women and children would divide themselves into smaller groups, with the most powerful group eventually dominating – and by “dominating” we mean killing off or driving off all competitors. A second scenario might see one dominant group “ruling” over the mob, but that might last only as long as the ones being ruled consented to the leadership (sound familiar?).

If anarchy reigns longer than a few weeks, count on it lasting a very long time because it will take a great deal of time for the ruling class – the government – to mount the forces and resources necessary to re-impose order. And there may be pockets within states – major cities, for example – that prove difficult to “re-take.” These areas will become a “No Man’s Land” reminiscent of the vile, brutal, deadly and putrid battlefields of World War I. 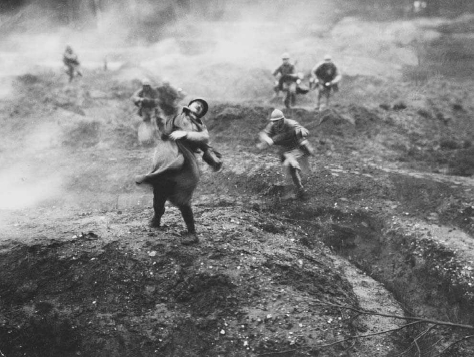 You’ll want to leave these areas as quickly as you can for they will become horrid killing zones filled with two kinds of people – predators and prey. If you’re not prepared to defend yourself and your group, you will quickly become the latter. But even if you are, sheer numbers of predators (large groups of survivors) may be too formidable to take on directly.

Plus, there will be a shrinking pool of resources to sustain you. The grocery stories, bodegas, markets and shops will all be cleaned out relatively quickly, and without power, whatever “fresh” food remains will spoil within a day (unless freezing conditions exist, and if that’s the case you’ll have a whole different set of problems to deal with, namely, exposure). So the zombies will take to raiding apartment and office buildings (probably apartments first since people keep food mostly where they live), cleaning them out block by block.

That cleaning out process will then begin to widen after a period of days and weeks, eventually reaching the outer city limits and suburbs. What’s more, there are likely to be bands of zombies operating in various parts of the city; as they widen their circle in search for food, they will eventually come in contact with each other and join together – or fight.

Included in the search for food will be the search for weapons, and in America, firearms are prevalent. Eventually, however, these, too, will become increasingly scarce – especially ammunition (that is a hint for you – did you pick up on it?).

If the anarchy lasts more than a month, then expect the roving bands of zombies to use whatever vehicles they can find to extend their search for food and supplies beyond the city limits – but how far beyond will depend on two things: how much reliable transportation the bands possess (don’t want to get caught several miles out of the city in a broken-down vehicle with little ammo and few supplies at night especially); and how much fuel is available for those vehicles. But if both are in good supply, the band will be able to extend searches great distances.

All of which brings us to this point: Do you have a bug-out plan? What will you do if your city disintegrates around you – and as you have likely seen in TV, with the recent unrest in Ferguson, Missouri, and Baltimore, among other places – things can disintegrate pretty quickly.

Can you get out of your city? And if so, do you know where to go?

Welcome to Bugout.news. This site will become a major resource for city dwellers, urban cowboys and suburban preppers who want to learn how to prepare for, and survive, citywide anarchy, should it ever come to your town.

Check back daily for helpful information you can use to prepare yourself for any breakdown in the civil society. We’re glad you’re here.