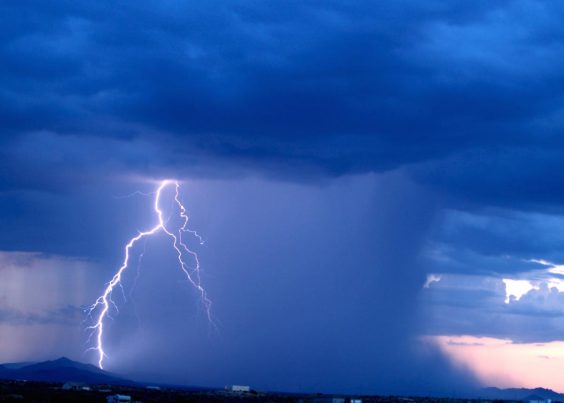 Recent emergency weather events reminded me again of why it is important to keep our prepping supplies current and fresh, and a bugout bag close at hand at all times, whether we’re at work, at play or at home.

In one of the first tornadic events of the season, CBS DFW reported that four people were killed and others hurt as four confirmed tornadoes struck an area east of the Dallas-Fort Worth metroplex. Two of the four tornadoes were somewhat powerful – EF-3s – and obviously powerful enough to cause extensive damage and loss of life.

Imagine, if you will, a major tornado, or several smaller tornadoes, striking urban areas like Dallas-Forth Worth directly; the casualty count would be horrific. Deaths would be in the thousands. Public services would falter and fail. Electricity would be smashed for days; maybe even weeks. (Related: Beyond “Grid Down” – Solar Flares Can Also Disrupt Railway Signaling Systems And Underground Conduit Pipes.)

Another event that is ongoing has to do with extensive rains and flooding throughout the Midwest, with rainfall in some parts as high as eight inches. According to The Weather Channel, the storms – which were expected to pick up again on Wednesday – caused major flooding that isolated large areas, closing roads and bridges, many of which may not be open for several days. Some, no doubt, have suffered structural damage and will likely be closed for months while repairs are made.

According to St. Louis television station KSDK, some 300 roads were closed – many just temporarily – at one point in Missouri. The affected roads included major interstates like I-44, I-55 and I-70.

As spring arrives, we can expect more of these kinds of weather events. Some will be extremely harsh and very dangerous. Many will cause extensive damage. This is precisely why we need to be prepared at all times for Mother Nature to strike; she does so like a thief in the night – quickly, and without warning.

In addition to weather events, major disruptions to “everyday life” can be caused by forest fires, earthquakes, massive power grid failure, widespread rioting and violence, among others. Road closures, the destruction of bridges and interstates, and societal unrest will mean that grocery stores won’t be resupplied, gas stations will run out of fuel and even the financial sector – banking, especially – could take a substantial hit.

All of these events and more will directly affect the safety and survivability of you and your family. To give yourself a better chance, consider taking these steps and/or making these arrangements/changes now:

— Bugout bag must be handy: Again, you just never know what is going to happen, or when, so you must be prepared at all times to revert into survival mode. This will mean you’ll need to have your bugout bag within reasonable reach at all times. That includes when you go to work, when you’re out on the town, when you’re shopping, running errands, etc. Don’t leave your bugout back behind; it won’t do you any good if you get caught out and about in an emergency and your bugout bag is at home.

— Check your inventory: From time to time it is important for you to look over your gear and inventory your food and water, to ensure that nothing is out of date and in need of replacement. Sure, long-term storage food lasts for many years, but if you’ve been prepping for a long time, expiration dates will creep up on you if you don’t keep track of how long it’s been since you bought your food. If it begins to approach its spoilage date, take it out and use it (go camping, eat it for dinner, etc. – it’s actually good experience). Make sure seals are still good and that water is still drinkable (Note: Commercially purchased bottled water, if it isn’t compromised in some way, has an indefinite shelf life.)

— Update your plans: There are few constants in life except death and taxes. Cities grow. Neighborhoods change. Streets and roads open and close. Make sure you’ve got an updated escape plan (should the situation dictate that) based on current conditions (geographical and otherwise) where you live. Everyone’s situation is different. Make sure your plan fits your situation. (Related: Nuclear War Or Civil War: The Big Cities Will Become Cauldrons Of Violence And Death – But You CAN Survive.)

Don’t be caught unprepared for extreme weather or other emergencies this spring and beyond. They say that “chance favors the prepared,” so spend a little time ensuring your preps and your plans are up to speed now, while you can.

Get more tips on prepping for survival situations at Survival.news.